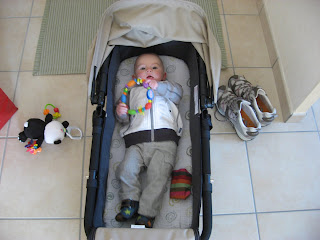 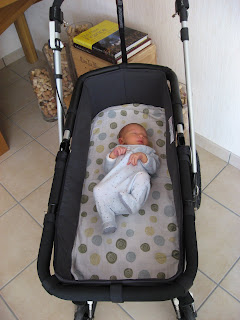 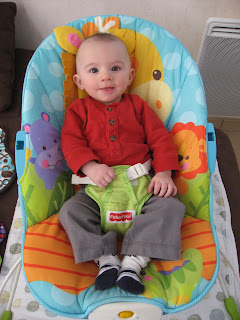 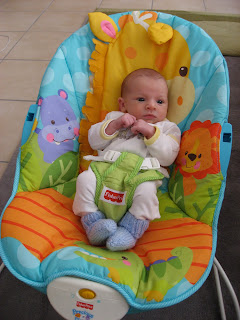 I find it hard to notice Xavier's growth, seeing as I spend every day with him. I see that he grows out of his clothes fairly regularly, but otherwise it is hard to put it into perspective. That is, until I look at photos of him from when he was younger. Or until last week when I put him in the stroller bassinet for the first time in several weeks, and noticed that he is as long as it is! Guess it is time to change to the seat attachment for the stroller!

Here are some before and after photos of the X-Man to show his growth.
Posted by April at 12:17 PM No comments: 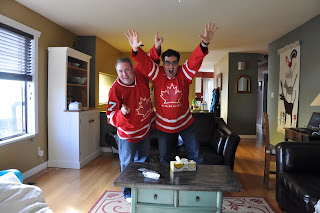 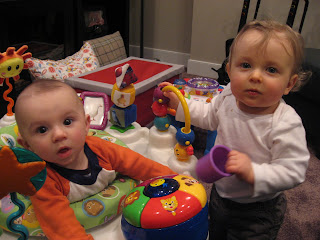 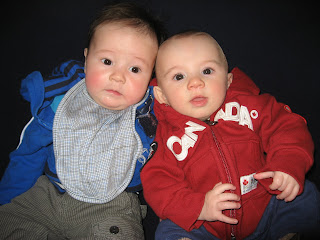 After leaving Calgary a couple of weeks ago, we returned to France with heavy hearts. As with our visit there almost two years ago, we were reminded that seeing our friends makes us realize how much we miss them. We always have a wonderful time with them during our stay, but inevitably we have to leave. This time it hit Gilles harder than after our first visit. He said he does not miss his Calgary work life, but really does miss our friends. I told him to give it a week and he would feel at home in France again. Sure enough, he went to the market last Saturday and returned saying that he didn’t know how we could ever leave France. But wine, bread, and cheese may not satisfy us forever….

A heartfelt thank-you to everyone that welcomed us into their home while we were in Canada. The Schultzs cooked for us while we were in Vancouver, and we weren’t even staying in their house! But a trip home would never be complete without Darcy’s wings and ribs! Thanks to the Duncans for welcoming us into their home in Calgary. It was great to finally meet Liam, who shared all his toys with Xavier. And thanks to the Jupps for throwing us a great party. We wouldn’t have been able to see many of our friends had it not been for them. And it was also great to finally meet little Eric Jupp. There will be lots of friends for Xavier if/when we move back to Calgary!
Posted by April at 12:51 PM No comments: 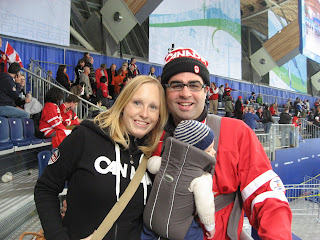 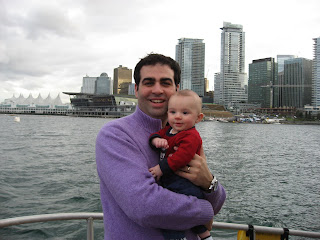 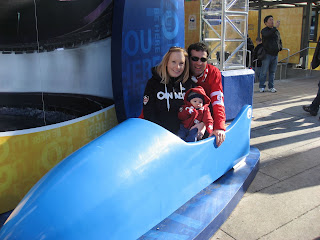 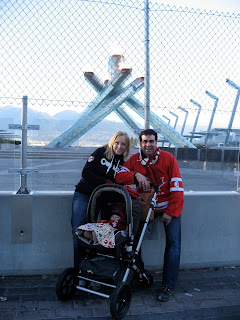 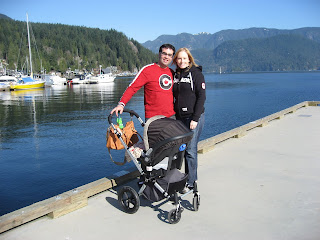 The main purpose of our trip to Canada was to go to the Olympics. It seems like forever ago that we decided with our friends the Schultzs and Jupps that we would make an Olympic trip. In fact, we bid on event tickets before I was even pregnant! As our departure date approached, we became increasingly nervous about making such a long trip with a four month old, but we knew we couldn’t pass on the chance to attend the Olympics in our home country. Thankfully, we carried through with our plans because we had a fantastic time! I had been away from Canada for 1&1/2 years, and there was no better way to celebrate being back than with thousands of Canadians, proudly wearing red and white and waving our flag.

Our first two days in Vancouver were sunny and very warm. We took advantage of the warm weather, and toured beautiful Deep Cove (the community where we stayed) and took in the Olympic sights in downtown Vancouver. Those days we were awake at 3:30 AM, entertaining a four month old that thought it was time to get up, but that gave us a bit of an advantage when it came to seeing the sights. We arrived at the Olympic Cauldron while most people were still in bed, ensuring we got a great picture of it. And just as the streets of Vancouver were filling up mid-afternoon, we were ready to return to our house for a relaxing evening.

Gilles, Xavier and I attended two events, both of which produced a medal for Canada. We saw the ladies’ team win Silver in short-track speed skating, and the men’s team win Gold in long-track speed skating. We were especially lucky with the Gold medal event because they presented the medals after the race, meaning we got to see the Canadian flag being raised and hear the anthem played.

Gilles also attended two hockey games, including Canada vs Germany, and one snowboard event. Unfortunately, it poured at Cypress the day of the snowboard event, and he returned to the house dripping wet.

One afternoon, we were treated to lunch and a sail around the Vancouver harbour aboard our friend Dave’s parents’ boat. It was Xavier and the Jupp’s son Eric’s first sail…quite the experience considering we sailed right past the floating Olympic rings, the cauldron, and the media centre. We’ll be sure to tell them all about it when they are older!

Now that we are back in France, we are missing the Olympics, as I am sure many Canadians are. It was such a great experience that we joked with our friends that we should make plans to go to Sochi in 2014. And who knows…maybe we will!
Posted by April at 1:00 PM 1 comment: 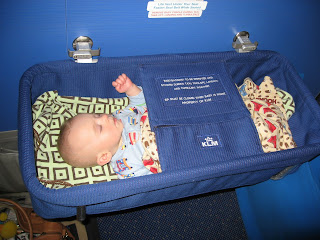 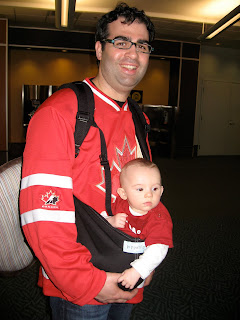 It has been awhile since I have added an entry to my blog. The past four months have been very busy, and blogging has been the last thing on my mind. But while in Calgary last week, several friends said they missed reading my blog, so I vowed to start writing again. Although I am not sure life with a baby is as exciting to read about as my past traveling life was!

Speaking of traveling, we have just returned from our first big trip with child. We were seasoned travelers before Xavier was born. We each had our own roles in planning a trip. Packing was a cinch-everything having its proper place in the suitcase. But throw in a baby with toys, diapers, and unpredictability, and the old rules are thrown out the window. Before going, we had a million questions: how will Xavier adjust to the nine-hour time difference in Vancouver? Will we ever get to sleep if we're up with him all night? Will we be the hated parents with the howling baby on the plane? But we need not have worried. Xavier was a great traveler, and we did a good job adjusting our usual travel pace to meet his needs.

The return trip did have its challenges, though. Xavier decided to poop through two outfits, and on our friends’ towels just as we were rushing out the door to head to the Calgary airport. While Gilles was dealing with the mess, I searched through the packed bags for more clothes for Xavier. Then, upon arrival in Pau, our luggage did not make it and our car had a dead battery. Not what you want after 20 hours of traveling! But all in all, they were only minor glitches during a wonderful two week vacation.
Posted by April at 1:19 PM 1 comment: