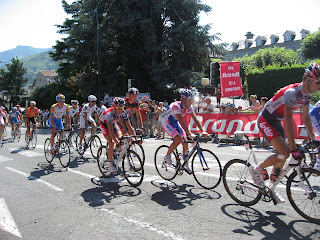 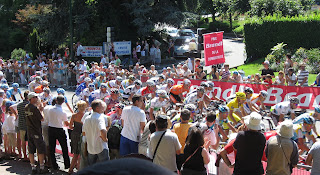 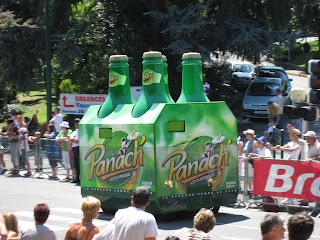 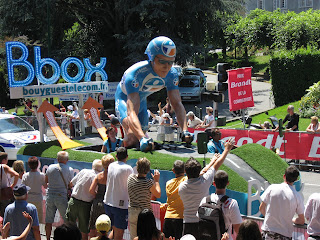 The famous bike race, the Tour de France, is in full swing, and we were able to catch part of it last Sunday. The race covers about 3,500 km in a little over twenty days. It usually passes through, or near Pau during its legs in the Pyrenees Mountains. This year, day nine of the event ended in a nearby town called Tarbes. We missed our chance to see the Tour de France last year, so figured we should partake this year in case it is our last chance to see it.

We decided to watch the riders pass through another nearby town called Lourdes. We arrived several hours before their scheduled arrival, not knowing what to expect for crowds and road closures. We camped out on a shaded, grassy hill beside the race route, and waited patiently with fans from all over Europe (cycling is big here!).

One nice surprise was the caravan that passes by about 1&1/2 hours before the racers. It is a parade of very modern floats from event sponsors, throwing out treats to the crowds. For many spectators, this is as exciting as watching the riders pass by. There were about thirty different sponsors, each with at least two floats (one for each side of the road).

Finally, the wait was over, and the racers approached…and flew by. They whizzed by so quickly that I could barely get a photo. Needless to say, I was not able to pick Lance Armstrong out of the pack! There were several groups of riders, but within twenty minutes, everyone had passed by. The wait was definitely longer than the main attraction, but it was nevertheless exciting and worth our Sunday afternoon.
Posted by April at 4:40 PM 1 comment:

Hot Days in the Cities

Last week we spent a few days in Paris and Belgium. The main purpose of our trip was to attend two Dave Matthews Band concerts, but we also managed to fit in some sightseeing and shopping.

It was our first visit to Paris in the summer, and we found it was certainly not the most pleasant time of year to be there. The French love their summer holidays, most taking either the month of July or August off work. During their time off, most Parisieners escape to the coast, and now I know why. During our Paris day, it was 34°C. Our usual favourite Paris activity of walking the streets became suffocating. Pounding the hot pavement, trapped between buildings allowing little airflow, was no longer pleasant. Rarely did a restaurant or store provide relief. Some had air conditioning, but it wasn’t very powerful, and we quickly felt hot again. We found temporary relief in a Starbucks, with an iced drink and moderate air conditioning. After only one day in the city, I found myself wishing that I was making an escape to the coast, or that the band was playing in Siberia.

The next day, we were supposed to take it easy. All we had to do was take a high-speed train to Brussels, check into our hotel, and spend a leisurely few hours in Brussels before traveling to the site of the outdoor festival. The day started off well, we even had a short nap after arriving in Brussels, but things went downhill quickly. We took a very hot train ride from Brussels to Leuven. The cheap commuter trains are not equipped with air conditioning, and often don’t even have windows that open. We then traded in the hot train for an even hotter bus. It was packed with concert-goers, and there was not a drop of air inside. Now I know that I have a much lower heat tolerance in my current state, but the sweat was pouring off everyone on the bus at the end of the thirty minute ride. Once we thought we had reached the destination, we were told that the festival entrance was another 1 km walk away! I mustered every bit of energy I had, and off we went. But once at the entrance, all was not rosy. I will spare the details, but if it hadn’t been for our good luck in stumbling on the medical entrance, we would not have seen the concert.

Thankfully, the concerts were great, so well worth the sweaty effort of getting to them. And on the third day of our trip, we did take it easy. We watched a movie at the cinema, sat on outdoor terraces drinking refreshing beverages (including yummy non-alcoholic Belgian beer), and paid frequent visits to our air-conditioned hotel room. Sorry for the lack of photos. We took some on my cell phone, but can’t figure out how to transfer them to the computer.
Posted by April at 5:35 PM 1 comment: