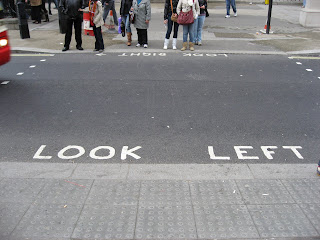 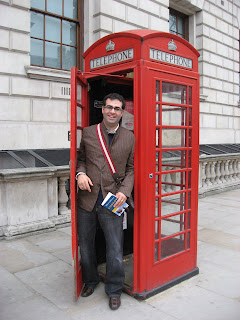 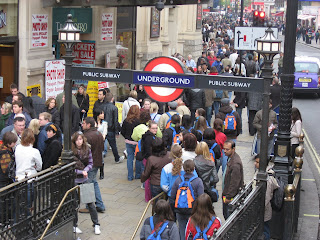 Gilles and I headed to London for the Easter long-weekend. It was our first time in an English country since we were in Canada last summer, and it was a refreshing break. The culture of an anglo-saxon country is very distinct, and being in London was almost like returning home.

One of our biggest goals while there was to get in lots of shopping, and as our Visa will attest, that mission was accomplished! In fact, the shopping in London was better than any other city I have visited. We picked up lots of clothes and books, and some fun English treats that we cannot buy in France: Gilles returned home with Crunchy bars and ten Cadbury cream eggs, I filled my suitcase with six boxes of crackers.

After a day and a half of shopping, we decided it was time to see some of the sights. London is certainly not the prettiest city we have visited, but it does have some great museums, and plenty of fun options for tourists. And the tourists were everywhere. It was the busiest city we have visited, and we almost always felt as though we were surrounded by tourists. We heard other languages being spoken as often as we heard English. Of course, not all the non-English were tourists. London has a huge immigrant population, and non-natives were working everywhere from restaurants, to the museums, to the underground transit system.

One of the best parts about London is the handy writing on the pavement that indicates which way to look when crossing the road. They drive on the opposite side of the road, and this has major implications for walkers. You would not believe how subconscious the act of looking both ways before crossing the road is. But the direction our brains want us to look is the wrong direction in London, setting us up for getting hit. In fact, I am sure that tourist accidents are what prompted the city of London to paint the useful directions on the road: Look Right or Look Left.

We did not see the queen, or visit an English pub, but we did eat Indian (twice), rode the ‘tube’ and rode on a double-decker bus…very London-y activities indeed.
Posted by April at 5:20 PM 1 comment: