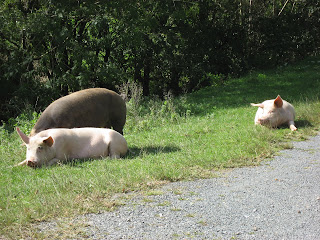 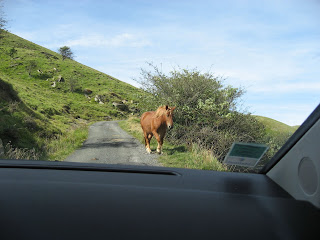 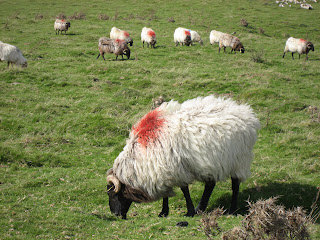 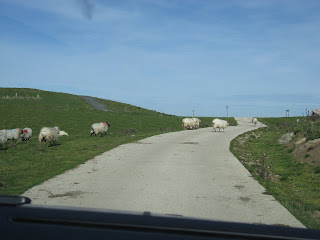 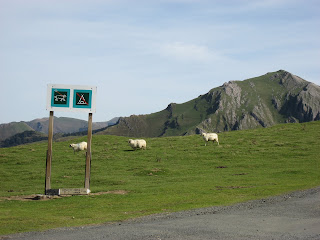 We recently attempted our first hike in the Pyrenees, the mountain range that is just south of us. It is a large range that divides France and Spain, and goes from the Atlantic to the Mediterranean coast. It was the first time that our hiking boots came out of the box that they traveled here in, but better late than never, right? We consulted a French book on hikes in the area, and selected one that promised a Roman ruin at the top of the mountain. This intrigued us greatly as fans of Roman history, and we have certainly never come across a 2,000 year-old relic at the top of any of the peaks we summited in Alberta.

It was a beautiful Sunday morning when we set out for the hike. We assumed the drive would be about 1&1/2 hours. Unfortunately, we did not anticipate the type of roads that would lead us there. About every half hour we turned onto a road that was smaller than the last. As we entered the foothills, we turned onto a road that was barely meant for two cars. Then, as we drove out of the forests and onto the grassy mountains, we switched to a road that was barely wide enough for our tiny car. Our speed of 130 km/h dropped progressively down to 20 km/h, leading to a 2&1/2 hour drive. Once we arrived (ie reached the end of the road), we spent the next hour trying to find the beginning of the hike. Eventually we gave up, and enjoyed lunch surrounded by the beautiful scenery. We may have been wearing our hiking boots, but there was no hiking to be had that day.

Our misadventure did not mean a waste of a day. The area that we spent the afternoon is magnificent. The mountains in the Basque (western) area of the Pyrenees could not be more different than the Canadian Rockies that we know so well. The Basque mountains are rounded, soft, and grassy. The grass is lush and green, much better than that in our backyard. This is where shepherds bring their flocks in early spring to graze freely on the grass. They remain there until the fall when they are led back down the mountain to their farm for the winter months. These animals are mostly used for their milk production. The milk from the high-alpine grazing makes wonderful cheeses. In fact, the sheep’s cheese from this area is one of the oldest known cheeses in existence. These animals are the epitome of free-range. Although we saw cows, horses, and thousands of sheep, we did not see a single shepherd or fence. The animals roamed wherever they wanted to, including on the tiny road and all around our car. It was quite a sight! We didn’t get to see the Roman ruin, but we did get to see something pretty special.
Posted by April at 6:18 PM No comments:

Autumn is here, and with it brings a favourite French pass-time: mushroom hunting. The whole family bundles up, and heads for the woods on Sundays in search of delectable, edible fungi. Yet how do they distinguish the edible from the poisonous varieties? Are the French taught the distinguishing features at an early age, or are mushroom related poisonings an issue in France? Turns out, they head to their pharmacist for species identification. Each different type of mushroom is placed in a separate bag; the pharmacist then consults their reference book and gives the green light if the variety is edible. Can you imagine?! This is just another reason why I cannot be a pharmacist in France. Unless I was asleep that day in class, our studies steered nowhere near the realm of mushroom identification! And I am not sure that I would want the responsibility of differentiating a deadly from a non-deadly mushroom for others. I can only imagine that that would boost a Canadian pharmacist's insurance fees!
Posted by April at 3:48 PM 1 comment:

I am a proud Canadian and think my native country is wonderful. It is a large country with varied landscapes and cultures, offering something for everyone. Canada is a safe, politically stable country, with a great worldwide reputation. And even though I love France, my adopted country, it is sometimes hard not to compare things here to Canada. And because of my patriotic bias, Canada often has an unfair advantage in these comparisons. So imagine how astounded I was when I recently met people that fear life in Canada!

In the past several weeks, I met three French people that were given the chance to move to Calgary with Total, the company that brought us to France. It was three separate encounters, but each one of them looked at me in awe, saying “but it is so cold!” .

One of the families decided to take the position and move to Calgary. I met with the lady of the family to discuss life in Calgary and Canada. She has lived her whole life in southern France, and was clearly uneasy about her pending move. We discussed many aspects of her new life, but somehow about every ten minutes, she brought the conversation back to the weather. Here are some of the questions I received, many of them more than once: How cold does it get? When does it get cold? Do the kids play outside at school? Where do I buy boots? You plug your car in? I tried my best to put a positive spin on things. I explained that Calgary gets several chinooks every winter. I told her the kids would love playing in the snow, sledding, making snowmen. Maybe they will learn to skate. I tried not to mention that the temperature can sometimes drop very low in October, or that it can snow in May. She was anxious enough as it was, I did not need to fuel her fear.

Last week I met a lady that turned down the chance to move to Calgary because of the weather. I was dumbfounded! I would think that being posted in Calgary with Total would be equivalent to winning the lottery. This is a company that does work in some very unstable, isolated, and potentially unsafe locations around the world. This family could alternately be offered to move to Nigeria, Angola, Myanmar, Qatar, but they refused to go to Canada because of a little snow!?! They would prefer potential car-jacking, civil war, droughts and developing world conditions to freezing temperatures!?!

Is life that unfavourable in the winter? Are Canadians really living at a disadvantage? I obviously do not think so, but it is interesting to see how others perceive our country.
Posted by April at 3:54 PM No comments: