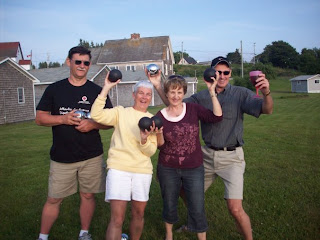 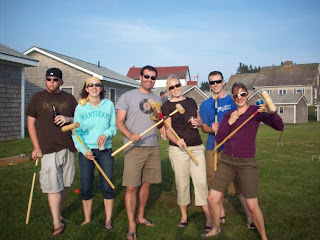 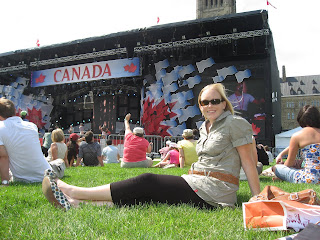 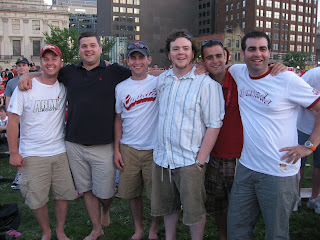 Our month long trip to Canada has come and gone. We divided our time between Ottawa, Campobello Island, Miramichi, Arichat, and Halifax. With friends and family, we spent our time eating, drinking, laughing, playing a variety of lawn games, and cooking things over beach fires.

We had a lot of expectations heading into our first return visit to Canada. Mostly, we weren’t quite sure what it would be like to be back in our home country after becoming accustomed to another culture. Our first meal out on our first day back was the biggest challenge: Canadians on a restaurant patio being their normal, noisy selves was annoying when used to the more quiet and reserved French. Hearing English seemed strange rather than a welcome break. And being waited on by a bad server, then being expected to give a tip, was almost too much to handle. But by the time we awoke the next day, we were back to our Canadian selves, chatting noisily with the rest of them. Other things were more challenging to get used to: the poor value for wine at the Maritime liquor stores, and the lack of in-season fruit and vegetables at the grocery store. So now that we are back in the land of wonderful, cheap wine and six varieties of local peaches, we can’t help but be reminded of things that are better in Canada…the grass is always greener, isn’t it? So here are some Canadian things that are hard to beat:

1. Clean public washrooms. You can’t really appreciate this until you have traveled elsewhere (not including the United States). Canadian public washrooms are roomy, and almost always have soap and toilet paper. In most European countries (I can’t speak for the UK), the stall is so crammed that it is often hard to close the door, and there is often no toilet paper or soap. One also never knows what type of toilet awaits them: a ‘normal’ toilet, a toilet with no seat (modified squat), or a complete squat (usually for men). In Canada, there is a general hierarchy for bathroom niceness and cleanliness: Fancy restaurants often have matching fancy washrooms, airport washrooms are usually spotless, and are becoming increasingly touch-free, and lower on the list are gas station washrooms where some are good, and some are bad. But in Europe, almost all bathrooms are bad. In fact, I am shocked when I come across a good bathroom. I have counted only two to date: at L’Atelier in Arles, France, and Caffe Sicilia in Noto, Sicily. I also have a list of the worst bathrooms encountered in Europe, but I will spare you these details.

2. Ethnic food. French food is wonderful, but eating the same thing over and over again does get a tad monotonous, unless you are French. So while in Ottawa and Halifax, we loaded up on ethnic food: thai, vietnemese, indian, and sushi. Actually, we had sushi six times while away, including our last three meals in Canada! Hopefully that will carry us through to our next visit.

3. Junk food. Perhaps this is not something to be proud of, as it doesn’t help the expanding Canadian waistline. But it was great to have licorice, smores, hot dogs, creamy dips, and all the other junk food that is missing in France.

4. Canadians. We have spent the last nine months trying to understand the French. We have come a long way in learning what makes them tick, but despite this we will always feel like outsiders looking in, because we are not French. So there is nothing like returning home and being among Canadians, and feeling like we do fit in. There are things that outsiders will never understand about us. For example, on parliament hill on Canada day the (old) Hockey Night in Canada theme was played. In response to recent events, thousands of Canadians in attendance booed. An outsider looking in would not have understood, but I proudly supported the booers. Or the strong feeling of national pride that is brought on by a snowbirds fly-over, or the RCMP musical ride. That is Canada.
Posted by April at 3:02 PM No comments: