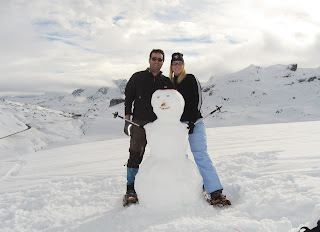 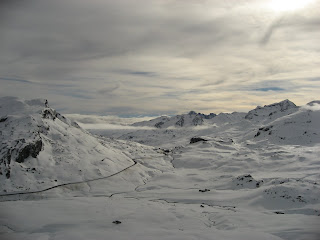 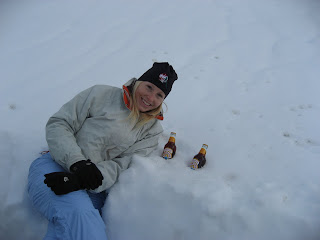 Gilles and I went on our first snowshoeing trip in the Pyrénées a couple of weeks ago. I was almost ready to write-off the Pyrénées as our past excursions have been disappointing. I couldn’t help compare this mountain range to Canada’s Rocky Mountains, which we love dearly. But the Pyrénées, though beautiful in their own way, are not the Rockies. So as we drove to our destination on the Spanish border with the temperature hovering around ten degrees, I tried to remain open-minded, but was doubtful we would have much success.

As our little car with summer tires (chains in the trunk) climbed the windy roads, the temperature slowly dropped to two degrees and when we reached our destination there was actually snow! Snow, and many Spaniards and French people who had the same idea as us. In past snowshoeing trips, our group had been alone in the great outdoors. I felt like a pioneer, deciding on a route, trudging through mounds of fresh snow. But I am not comparing, right? So we buried some snow beer (some things never change), and strapped on our snowshoes. But our top-of-the-line snowshoes ideal for blazing trails, steep climbs, and icy conditions looked out of place in this landscape. The people around us were wearing small plastic snowshoes, not much larger than their boots. Nevertheless, we set out to the admittedly beautiful pass for some fun in the snow. The area was very large so we were able to separate ourselves from others and do our own thing. We finished our venture by building a snowman. We felt like two kids playing in the snow, and it was great!

One fun aspect to a Pyrénées trip that cannot be had in Alberta is cross-border shopping. At the border, 1750 m above sea level, there are several Spanish bars and grocery stores that cater to the French who cross into Spain for cheaper gas, cigarettes, alcohol, and food. We ventured over and stocked up on chorizo sausage and canned octopus (don’t ask). Further down on the French side was a cheese vendor set up on the side of the road. So, we stopped and bought some of the wonderful alpine cheeses. We just needed to add some bread and wine and we had a perfect post-snowshoe supper!
Posted by April at 5:18 PM No comments:

I promised to write about French holidays, so I am going to include St Nicolas day. It is only celebrated in the North-Eastern parts of France, around Lille and Strasbourg, but is observed in many other European countries (Belgium, Netherlands, Hungary,…). First, an explanation of saint days.

Most French would not consider themselves religious. The downfall of Catholicism in France began with the French Revolution, which led to a separation of church and state. Many of the holidays currently observed have religious origins, but the original purpose is long forgotten. Most of the once religious holidays are now a reason to get together as a family and eat.

One religious practice that does persist to this day is the recognition of saint days. Every day of the calendar year has a saint or sainte associated with it. Until the early 1970’s, all children born in France had to be given one of these names. Today the naming rules are not so strict, but the French still recognize the saint of the day. For example, today is Sainte Barbara day, which means it is the ‘fête’ of all women named Barbara. This is in contrast to one’s birthday, which is called an ‘anniversaire’. On your saint day, people wish you a ‘bonne fête’, and you will receive a cake and small presents.

December 6 is St Nicolas day. He is the guy that inspired the creation of our Santa Claus. On Dec 6, he arrives to give children small gifts, often of fruit and candy. In Amsterdam, he arrives via boat and children wait at the port for his arrival. He asks the kids if they have been good, and then proceeds to give them treats. The method of St Nicolas’ arrival varies by country, but regardless of location, the day is finished off with a big family supper. The countries that celebrate St Nicolas day also celebrate Christmas, but no mysterious man arrives to deliver presents to children on this day. Any gifts that kids receive on Christmas are from family.
Posted by April at 1:12 PM 1 comment: