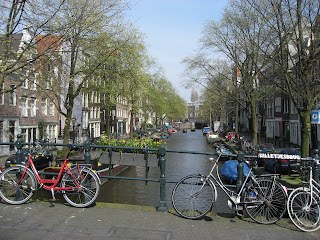 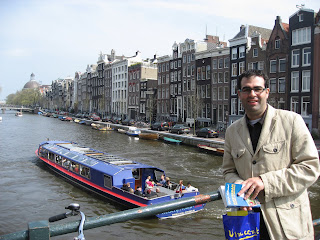 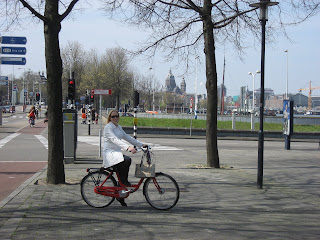 Gilles and I just returned from a great visit to Amsterdam. This city, whose motto is “live and let live”, has something for everyone. It is a beautiful and mostly peaceful city. There are as many bicycles in the Netherlands as there are people. Forty percent of the vehicles on the road in Amsterdam are bicycles. The lovely, strolling bikes with baskets (often milk crates), rust, and so tall that it is impossible to slouch. Their strong presence, and lack of cars, makes for an oddly quiet city. Unless of course, one is strolling through the infamous Red Light District or busy Damrak street.

The city is built around a meshwork of canals. Similar to Venice, but the buildings are usually set further back from the water. Low boats leisurely cruise the canals toting both tourists and locals. The winding canals make for some challenging navigation on foot. We managed to get misdirected in Amsterdam almost as much as when we were in Rome.

One thing we noted was how tall the Dutch are. Very, very tall. I felt short for the first time in my life. That feeling was particularly odd considering I tower over most women (and many men) in France. Last week, I was told that the athletic store in Pau only carries my preferred sneaker up to size 9. Not very convenient when I wear a size 10. I have a feeling I would not have the same problem shoe shopping in Amsterdam!

We are back in town for only two days before we pack up the car for a trip to Barcelona with our friends Jen and Dave who arrive Friday from Calgary. More traveling updates when we return!
Posted by April at 2:59 PM No comments:

After an observant seven months in France, I now feel comfortable pointing out two physical traits that most French people exhibit. My sociological study is based purely on my own observations, yet I believe the results would stand more rigorous testing. And as with any culture assumption, there are certainly French people who do not fit this mold (although the non-conformists are few and far between).

Now that I have stated my disclaimers: most French people have the genes for skinny legs and big noses.

As for skinny legs, you may be thinking that most French people are at their ideal weight, or even skinny, so of course they have skinny legs. But there’s a difference. I am not talking about thin legs or ‘normal legs’. I mean skinny-like-twigs legs. I sometimes wonder how they support the person on top. Legs that inspired the skinny-leg jeans style. Legs that sometimes make skinny jeans look baggy! Ugh!

There is not much that I can say about the big nose, except it’s big. And it appears to increase in size with age. I also noted this characteristic on Italians, so perhaps it is a southern European trait.

Where do I fit in? I clearly possess neither skinny legs nor a big nose. Any French genes in my past have clearly been diluted. My lack of skinny legs and a big nose, along with my freckles and blond hair, clearly identify me as non-French. While I am quite fond of my cute little nose and would never wish it away, I wouldn’t have minded dipping into the skinny legs gene. After all, those genes would make it much easier to buy French jeans!
Posted by April at 8:17 PM 1 comment: