I always chuckle to myself as I walk down the ethnic food section of the grocery store. The selection is very small, which is not surprising because the French like French food. Most ethnic restaurants that we have tried have adapted their country’s food to satisfy the French palate. Our favourite pizza restaurant tops their pizzas with French emmental, crème fraîche, and a raw egg. At the local Indian restaurant we received the blandest curries that we have ever eating. And in case you are not a connoisseur of Indian cuisine, bland and curry should never be used in the same sentence. Even the Blue Elephant, our favourite Thai restaurant in Paris, has scaled back the heat to satisfy the French’s wimpy tastes. The ‘three elephant’ dishes (elephants being the indicator of heat), only cause a mild tingling sensation in our mouths.

In the ethnic food section in the grocery store there are the typical Chinese, Thai, and Japanese items that also line the ethnic food aisle in Canada. But what amuses me are what they consider ‘ethnic’ here, but are commonplace at home. Here are some examples, most at ridiculously high prices:

The list is very interesting, but perhaps what is most intriguing is not what is available, but what is not available. Who decided which items to import? I am unable to buy yellow mustard, baking powder, molasses, chili powder, or chocolate chips, but I can buy Marshmallow Fluff?!
Posted by April at 1:48 PM 1 comment:

I often get asked whether the same holidays are celebrated in France as in Canada. And if so, if they are celebrated in the same manner. So I thought I would start writing an entry describing each of the French holidays as they take place. I'll include statutory and non-statutory holidays, if the latter involves something interesting. I will start with le jour d'Armistice, since it was only last week.

In France, Armistice Day is a public holiday. As is the case with most statutory holidays, large grocery stores remain open and smaller businesses are closed. And as is the case 365 days/year, the boulangeries remain open. A day cannot pass without fresh bread!

Unlike the anglo-saxon tradition (yes, the French still call us anglo-saxons), November 11 strictly celebrates the end of the first world war. France's participation in other wars is not commemorated on this day, yet as there are no WWI veterans remaining in France, there is talk of expanding this practice. Ceremonies are held at large war memorials, usually at the location of battles (ex. Verdun). There are not ceremonies held throughout France, as is the case in Canada. Poppies are not worn, despite the fact that the famous poppy fields are in France and Belgium. In fact, very little is made of Armistice Day in most of France. Maybe that will change if/when they anglo-saxonize the holiday. And yes, I just turned the term anglo-saxon into a verb....
Posted by April at 3:49 PM No comments: 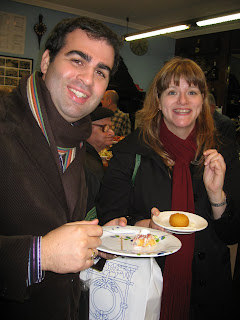 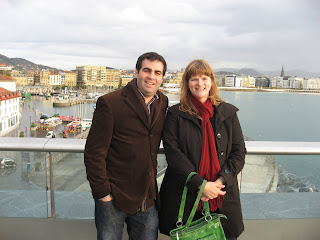 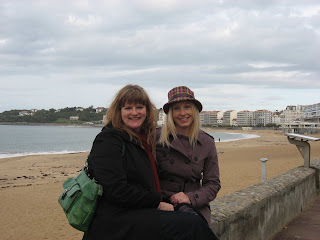 This week we had a visit from an old friend from home. Kimberly London was a great friend during our days at Mt Allison and an old roommate of mine. She knew us both before Gilles and I started dating. In fact, during our reminiscing we recalled that she met Gilles before she met me. We have done a poor job of keeping in touch with Kim during the last few years, so her visit gave us the chance to get caught up. And a visitor from home always means treats for us. Kim graciously filled her suitcase up with licorice, peanut butter, and raincoast crisps for us. Yummy! And the empty space meant she could buy more treats in France to bring back with her.

She split her time in France between here and Paris, where she has another friend. She had never been to Europe, and really enjoyed her first trip. She was very brave and tried several foods outside of her comfort zone, including tartare, escargots, and veal liver. I was very proud of her willingness to try new things.

The visitor count is up to ten people, with more guests scheduled to arrive in one month. I love our traveling friends and family!
Posted by April at 5:55 PM 1 comment:

Some of our Favourite Things, Italian Style 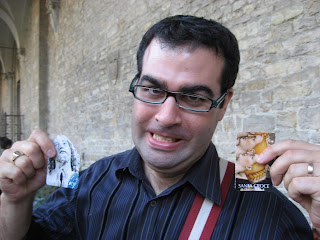 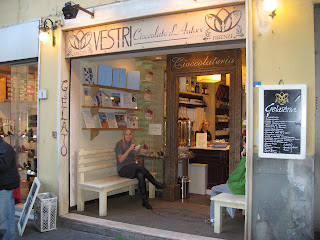 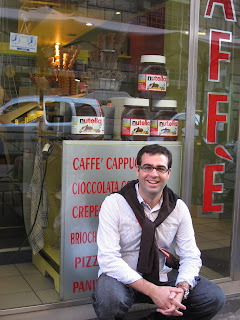 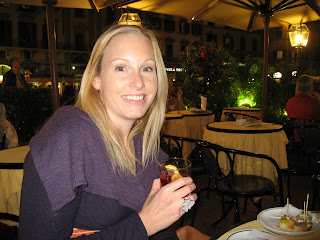 Oh Italy! I don't think I could ever tire of travel in Italy. We recently spent two nights in Rome and three nights in Florence. The two main purposes of the trip were for Gilles to get a Gabonese visa in Rome and to buy a watch in Florence. But we managed to also fit in plenty of eating, sightseeing, and shopping. So here is a list of some of our favourite Italian things (plus Gilles' most hated thing):

1. Gelato. And Florence is the top gelato town. There was a gelato shop on every corner, beautifully displaying their product in heaped mounds topped with the main flavour ingredient. While these presentations are pretty, they usually indicate that the gelato is factory produced (with added colour and artificial flavours) rather than artisanaly made. I did some pre-trip homework and found four gelato shops in Florence that make their product in-house using only natural ingredients. We tried all four, and they were perhaps the best gelato that we have ever had in Italy. And that is a big statement considering how much gelato we ate during our six week trip to Italy last year. We named a little shop called Vestri as our top shop in Florence.

2. Nutella. Gilles swears that Italian Nutella is better than French and Canadian Nutella. You may think he is crazy, but he has eaten enough Nutella to be an expert.

3. Campari Soda Cocktails. My favourite cocktail is nearly impossible to get elsewhere, but commonplace in Italy.

4. Italians for their fashion sense. They are amazing to watch.

5. Italians for their craziness. The further south one goes, the more chaotic things get. Coming from conservative countries like Canada and France, it is fun to watch such animated people.

6. Free snacks with drinks. A necessity after a full afternoon of walking. At 6 PM it is too early to eat supper, so these little treats really hit the spot.

7. The food. We love French food, but for us it is hard to beat Italian cuisine. The French win out on cheese, bread, and maybe wine, but for everything else, head to Italy. It's simple, fresh, and delicious.

And now for the hated thing: paying to get into a church. And the Catholics know how to get the most money out of tourists, charging more than non-religious sights for equivalent viewings. For example, we paid 12 euros to enter one church to see a single famous painting, and 12 euros to enter the Uffizi gallery, a large museum containing many famous paintings. To appreciate how angry this makes Gilles, refer to photo above. That's not a happy tourist!
Posted by April at 3:24 PM 2 comments: 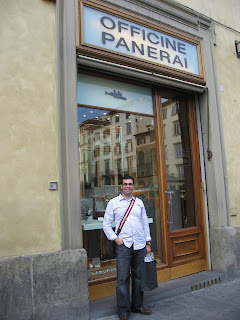 As most of you probably know, Gilles is a lover of watches. Specifically, top-quality, handmade watches. He marvels at the craftsmanship and science of these time pieces. For years he has been saving money and researching watches to determine which watch to buy. Last week, the day finally arrived to make the big purchase.

After much research and consideration, he decided he wanted a Panerai watch. They are an Italian company, whose watches are now made in Switzerland. Last week we paid a visit to their flagship store in Florence to buy the watch. It was a special experience for Gilles. After buying the watch, we got to see their private museum containing several watches that have been made since the company was founded in 1860. It topped off a perfect afternoon of shopping in beautiful Florence.
Posted by April at 3:03 PM No comments: