France is notoriously bureaucratic. The French may even have invented bureaucracy. Well, that’s surely an exaggeration, but the word bureaucracy does stem from the French word bureau.

We were geared up to face bureaucratic roadblocks while settling in this country. Some requirements are frustrating, yet manageable: one needs a special license to play golf and go boating. To show proof of residence in France, one must procure a bill from the electrical company. Not a water bill or telephone bill, it must be from the electrical company. Fine, we’ll play along.

There are other regulations that are absolutely infuriating. For example, France and Alberta do not have a driver’s license accord. We, after having driven for 15 years, have to attend driving school! Yet if our licenses were from Quebec or Manitoba, we would be in the clear. Strangely (insert sarcasm), an Albertan can move to Quebec or Manitoba and exchange licenses without a problem. We also would have the driving green light if we were from Norway, Scotland, Australia, Indonesia, or Gabon. Several of these countries drive on the opposite side of the road, and I am not sure there are even paved roads in Gabon (another exaggeration, but you get my point). I’ll spare the details of how challenging driving school is supposed to be here. But to give you an idea, as part of the test I will have to lift the hood and identify engine parts…in French!!

To be fair to the French system, we are also facing difficulties with Canadian regulations. We are one of the only countries (along with the US), that does not permit its residents to have two passports. This does not pose a problem for most, but Gilles is constantly working in countries that require a Visa for entry and occasionally to exit. This means his passport is frequently held up at a consulate, which is not particularly safe or convenient.

Back to French headaches. Gilles has been requesting a six-month multiple-entry Visa for Gabon from their consulate in Paris. For months the answer has been firmly, no. A multiple-entry versus a single-entry Visa would make our lives easier for a variety of reasons. Gilles explored his options, and discovered that the Gabonese consulate in Rome would provide him with a multiple-entry Visa without question. So off to Rome goes Gilles. He was away from Pau for less than 30 hours. Being the good husband that he is, he knew he could not step foot in Italy without buying his italophile wife something characteristic from the country. So, in his brief but free time in the city, he managed to purchase eight bottles of wine, a bottle of olive oil, a two-foot salami, and lugged it back to France (you gotta love open borders!). If this were always the reward for suffering through bureaucratic processes, we would have no reason to complain. I would gladly learn the French word for spark plugs!
Posted by April at 5:02 PM 1 comment: 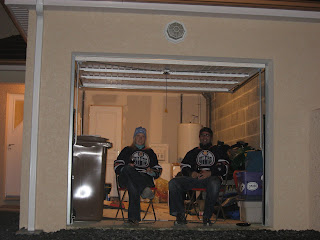 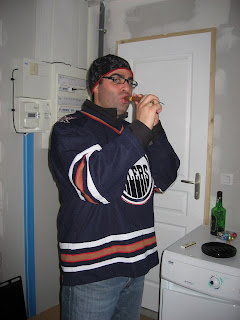 Thanks to a technological wonder called a Slingbox and some wonderful friends in Calgary, we are able to watch and record television programmes the same as when we lived in Calgary. Now we certainly do not experience the image quality of HD programming (in fact non-HD shows stream better), and weekends often provide bad viewing due to internet traffic, but we can hardly complain. The Slingbox has allowed us to stay in-touch with home, and has warded off homesickness due to a disconnect from one’s country that other expats experience. Above all, it allows us to cheer on the Oilers during their current playoff run. Because most games take place during the early morning hours here in France, we often watch games hours after they have ended. It takes much willpower to avoid checking the results on the internet. Last Saturday, the Oilers played an early afternoon game allowing us the rare chance to cheer on our team real-time. To our delight, the Oilers won…it must have been because we wore our jerseys!
Posted by April at 2:21 PM 1 comment: 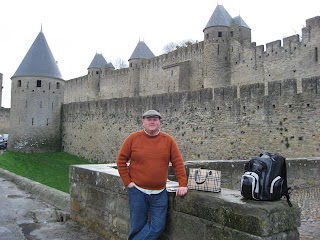 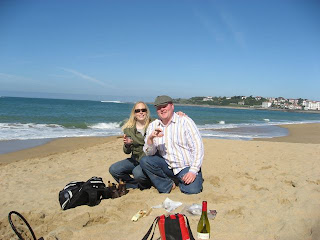 I said good-bye to our latest visitor today. Frankie McKibbon, an old friend from home, made his way down to Pau after completing a course in England. Frankie and I go back a long way, I don't remember not knowing him. We did plenty of reminiscing and got caught up on recent events in our lives. It felt particularly apropos to reflect on our French learning days at Croft Elementary School, as we sipped on wine and practiced our second language in France.

Frankie was an adventurous guest, wanting to try all the local delicacies. His only complaint was a cheese that was on the cheese platter at a local restaurant. We named it ‘le fromage du plancher de la grange’ (cheese from the barnyard floor).

We had a wonderful picnic on the beach at St jean de Luz, pretended we were knights fighting intruders at the castle of Carcassonne, and enjoyed Basque tapas and narrowly avoided getting soaked by the powerful waves at St Sebastian. A good time was had by all!
Posted by April at 5:55 PM No comments: